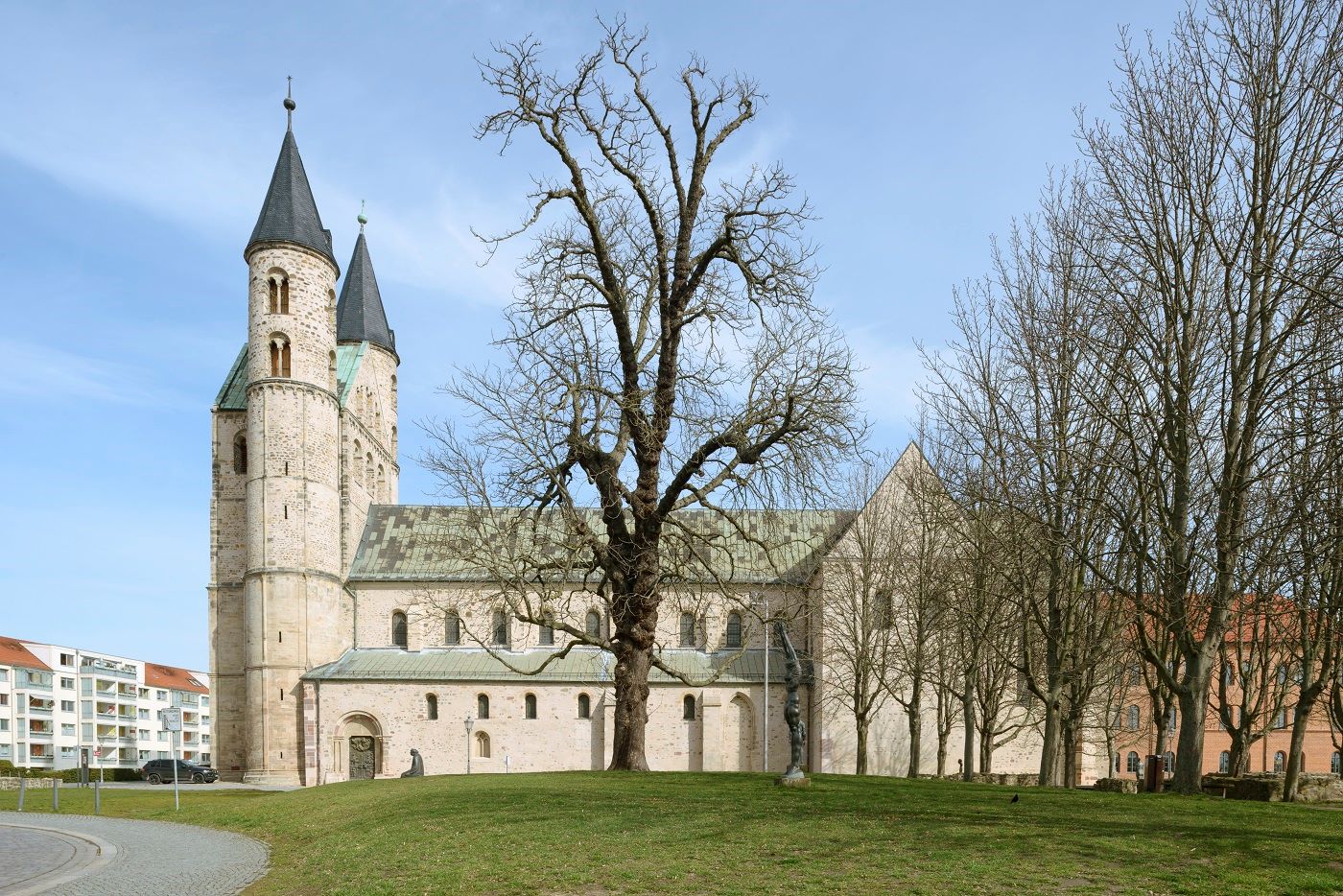 ARCHITECTURE OF THE MONASTERY CHURCH 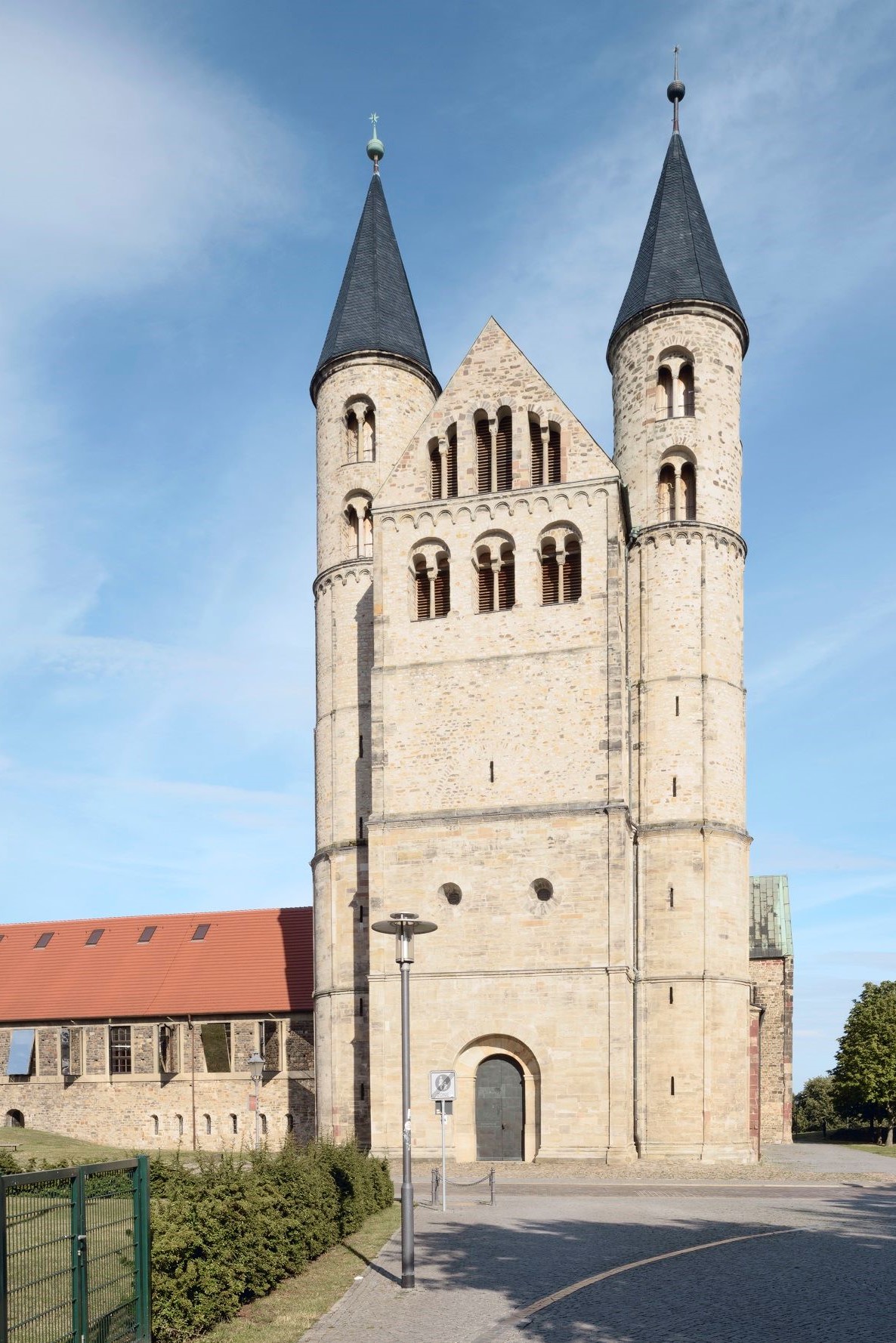 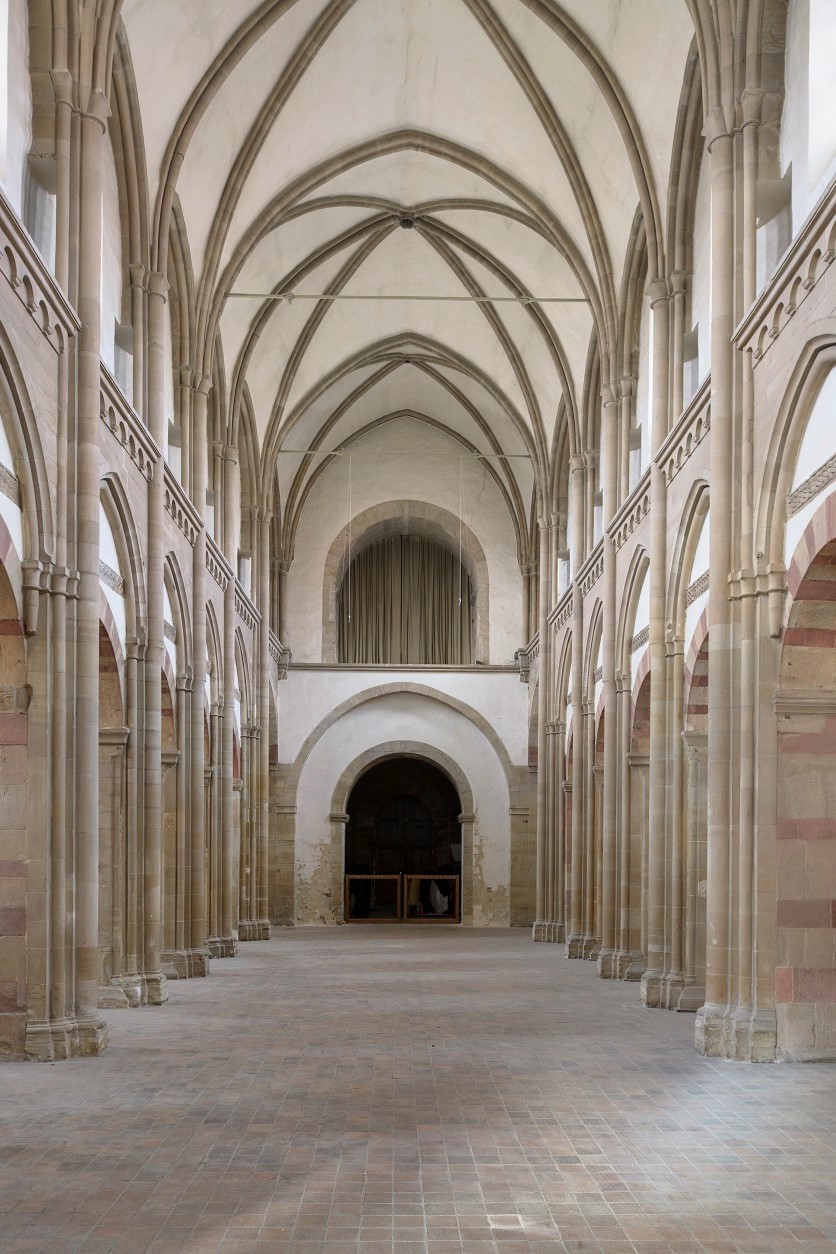 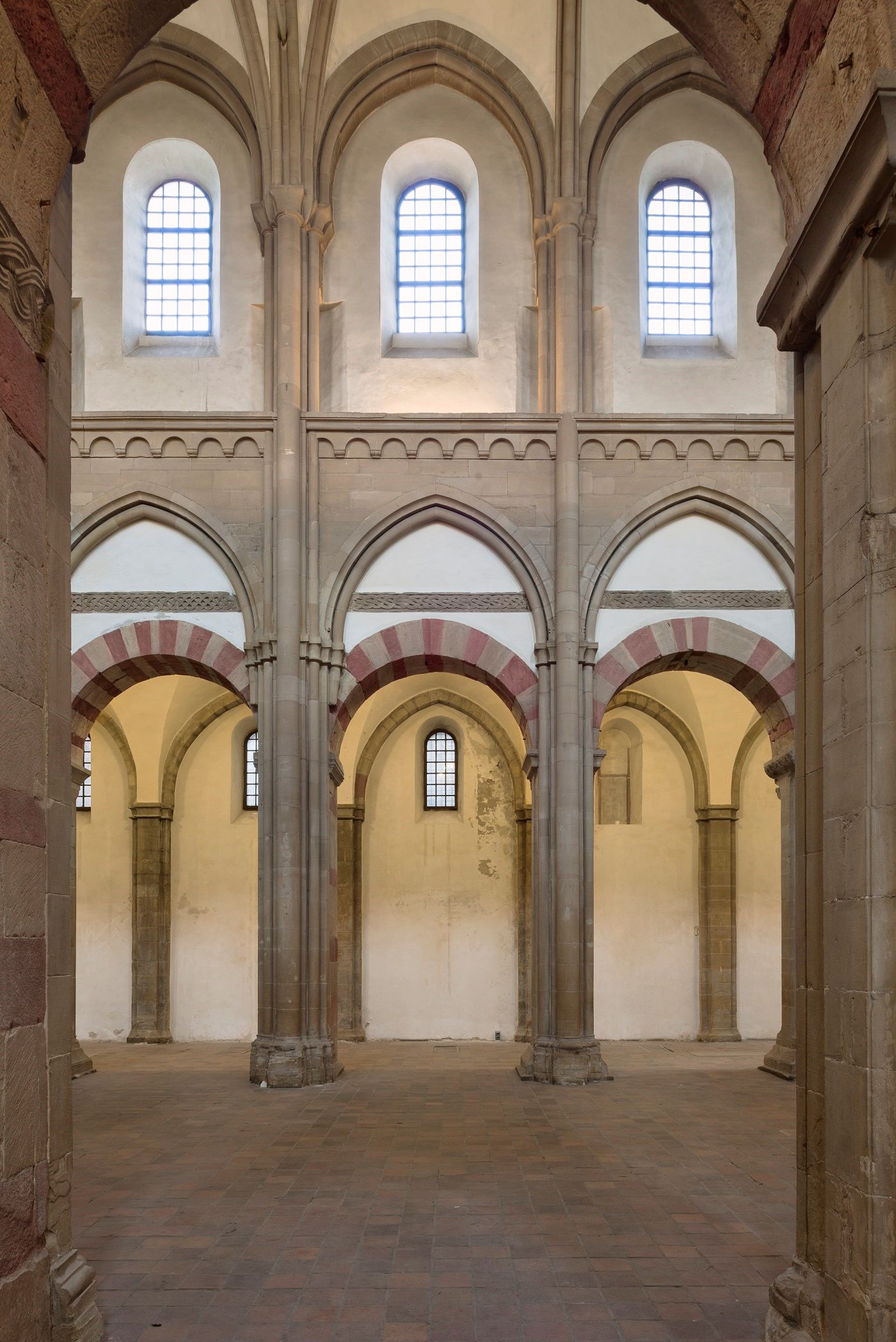 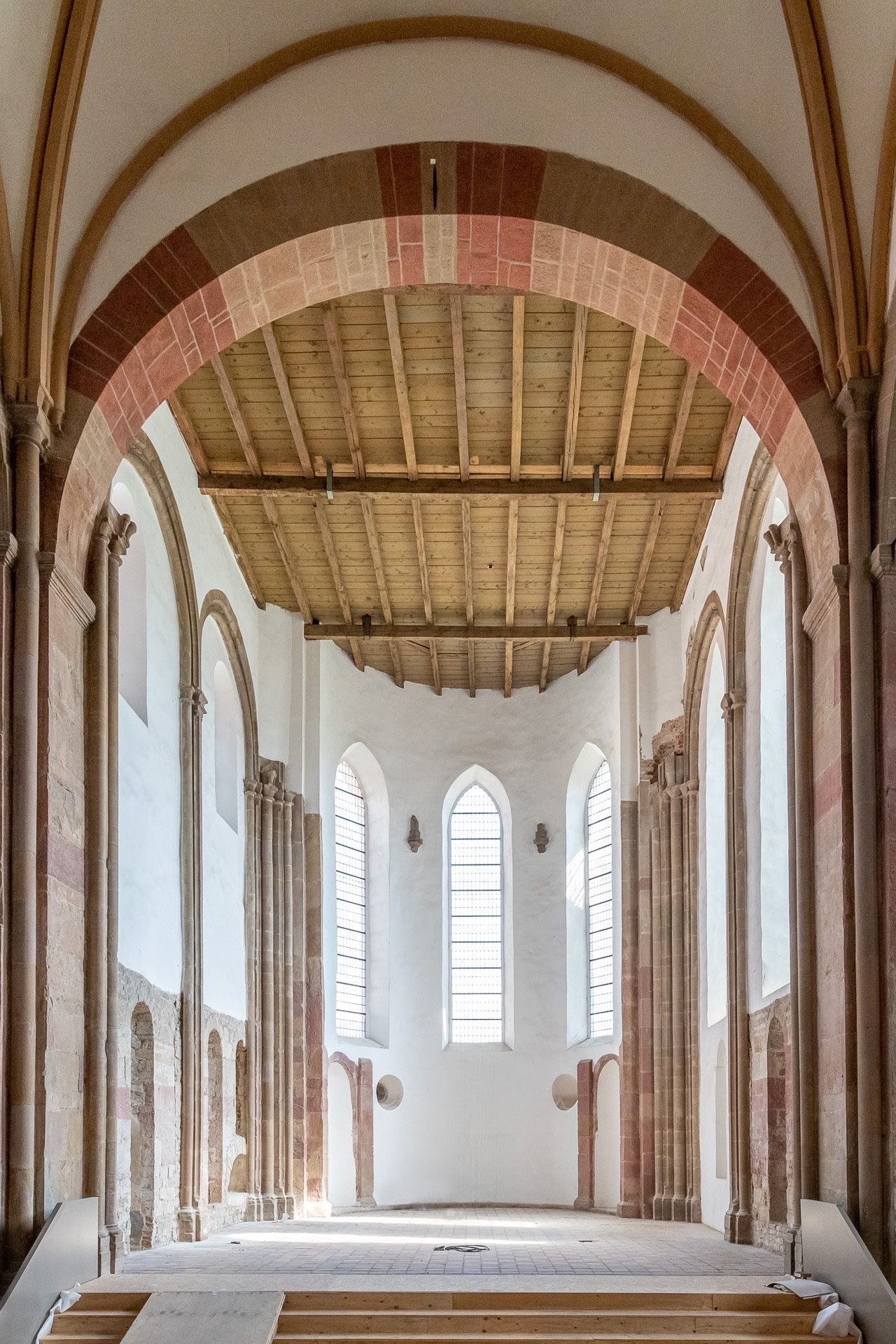 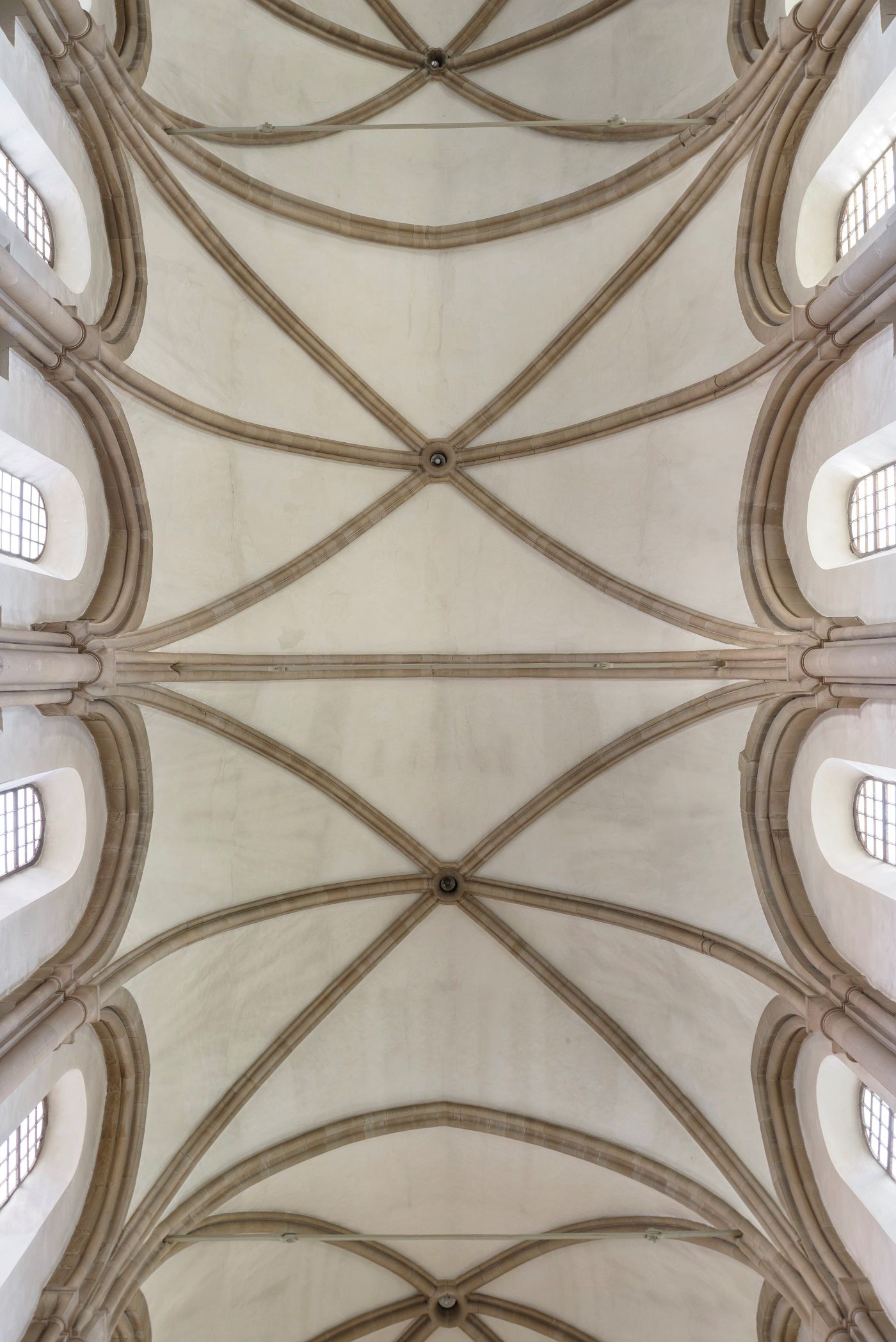 The collegiate church was erected during the tenure of Magdeburg Archbishop Werner von Steußlingen (1068-78). A three-aisled columned basilica with nine bays and a three-aisled crypt, apsis and separate crossing, it was one of the most modern monastery complexes of its time. The early Gothic ribbed vaults that characterise its appearance today were added to the existing Romanesque structure around 1220-30. Since the building surveys of 2021 it is certain that the entire basilica with its transept was erected as uniform structure across all nine bays, making the ascending stonework one of the best-preserved structural monuments of the 2nd half of the 11th century in the German-speaking region.

A few years after the death of the builder, the manifold ornamentation of the abbey church was detailed in historical sources. In addition to the scrolled windowsills, the interlaced cornicing along the walls of the two naves and the design of the transom areas and capitals of the nave piers as well as two preserved friezes and various palmette elements also belong to this original structure.

The structural ornamentation of the triple-looped rope originated in Lombardy and spread throughout the empire in the 11th century, reaching France. The friezes can also be found in northern Italy - with the oldest examples in Cividale and Aquileia.

The speed with which the basilica was erected in one decade after 1064 would also explain a number of inaccuracies, the varying qualities of stone mason work and a number of design changes. 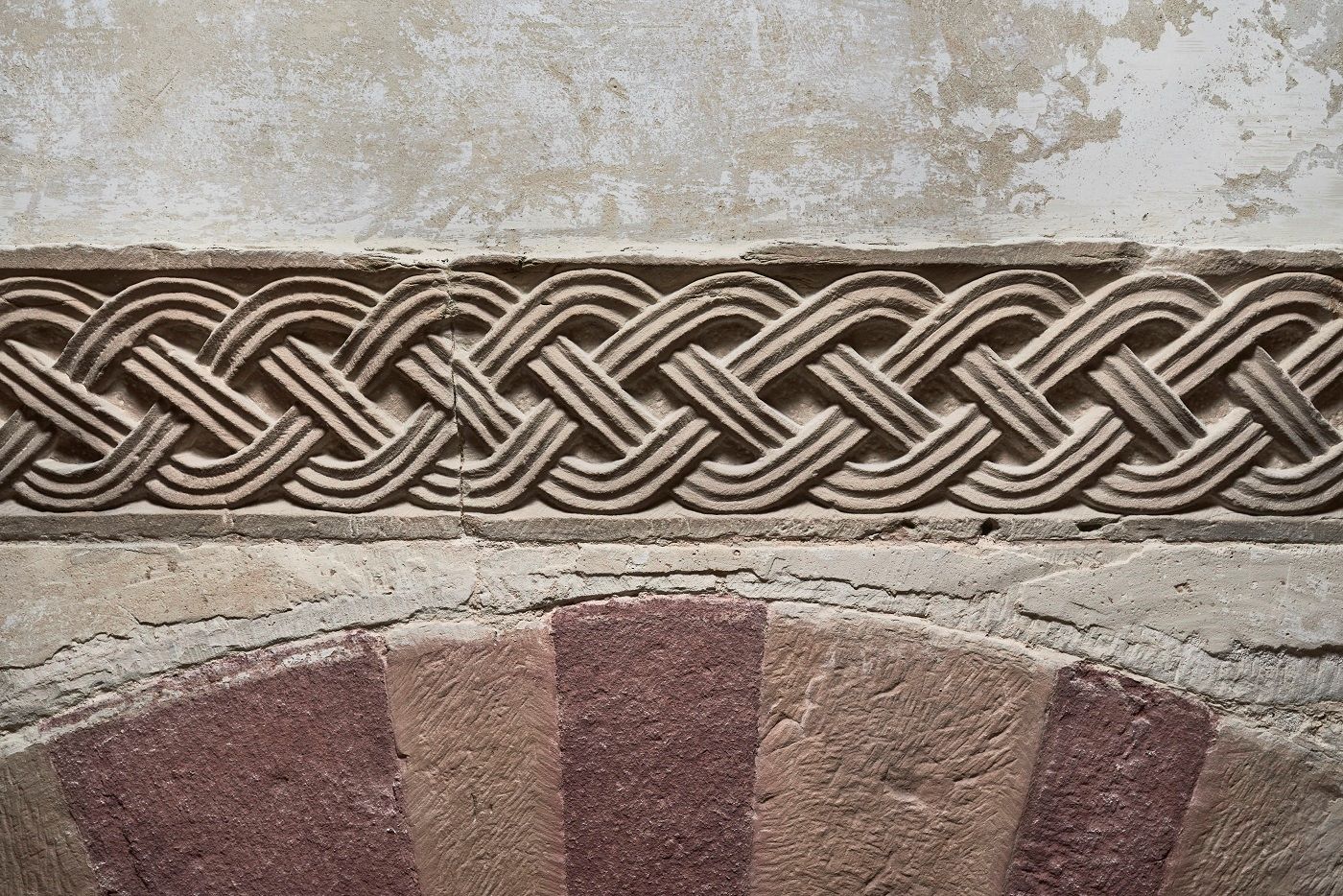 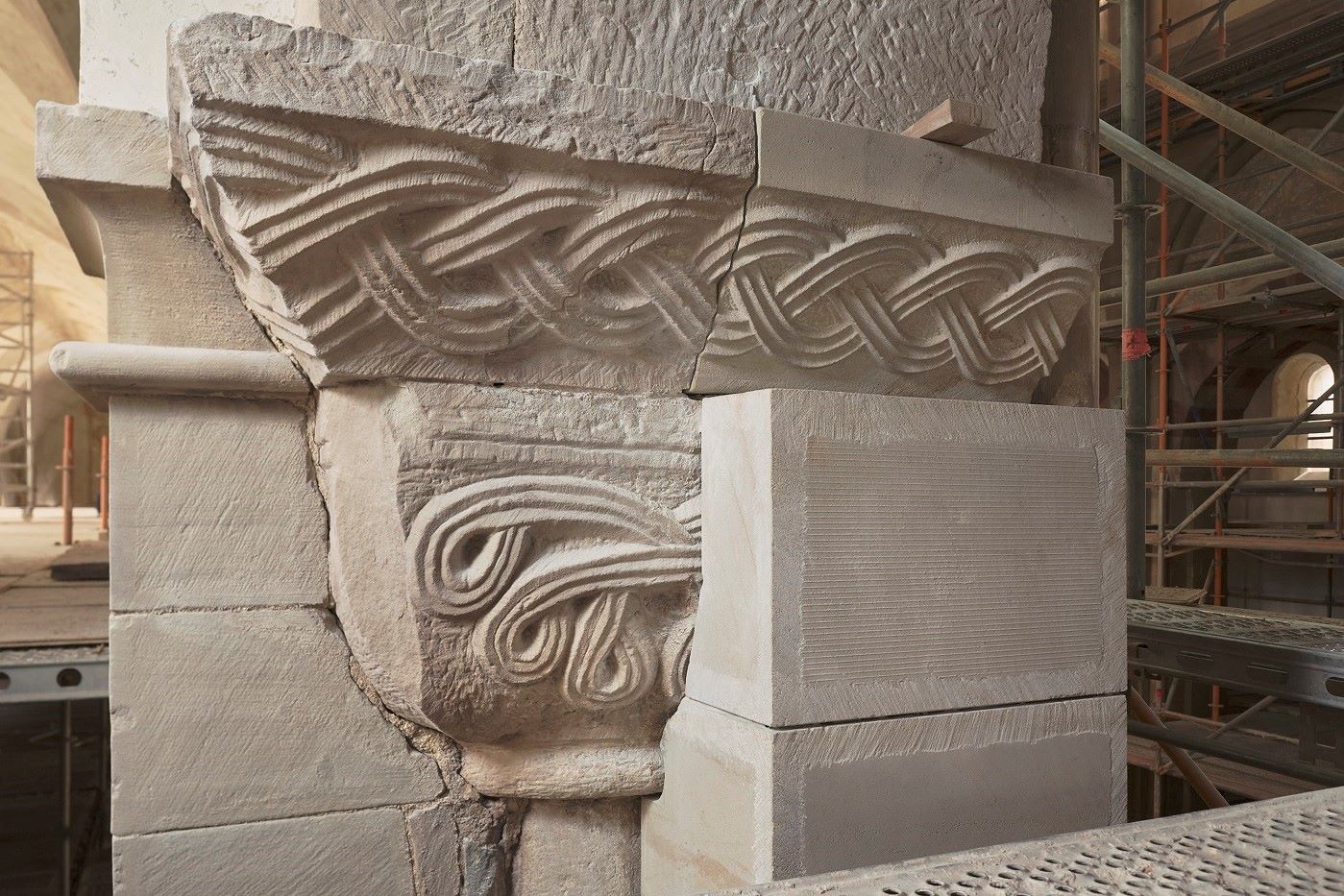 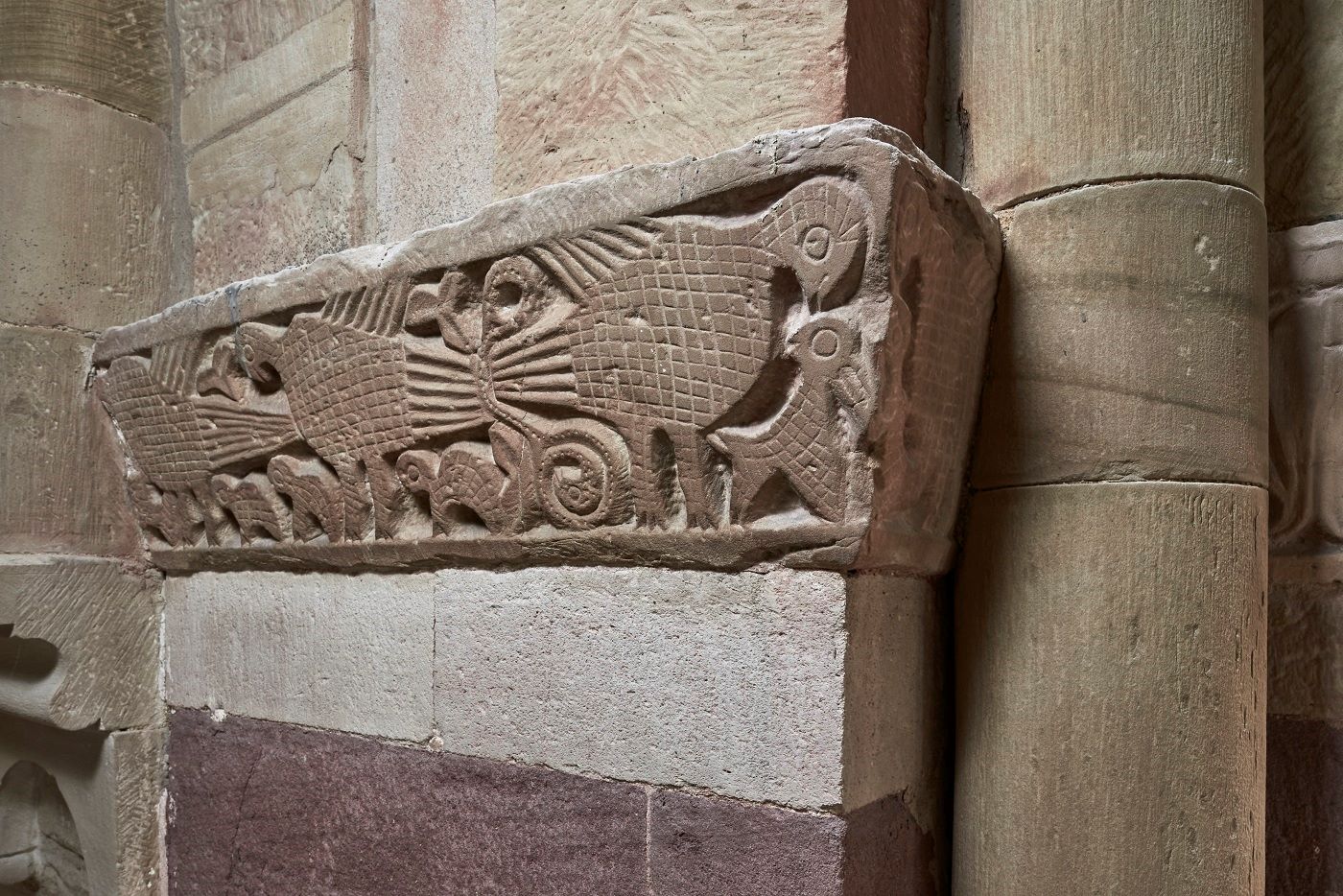 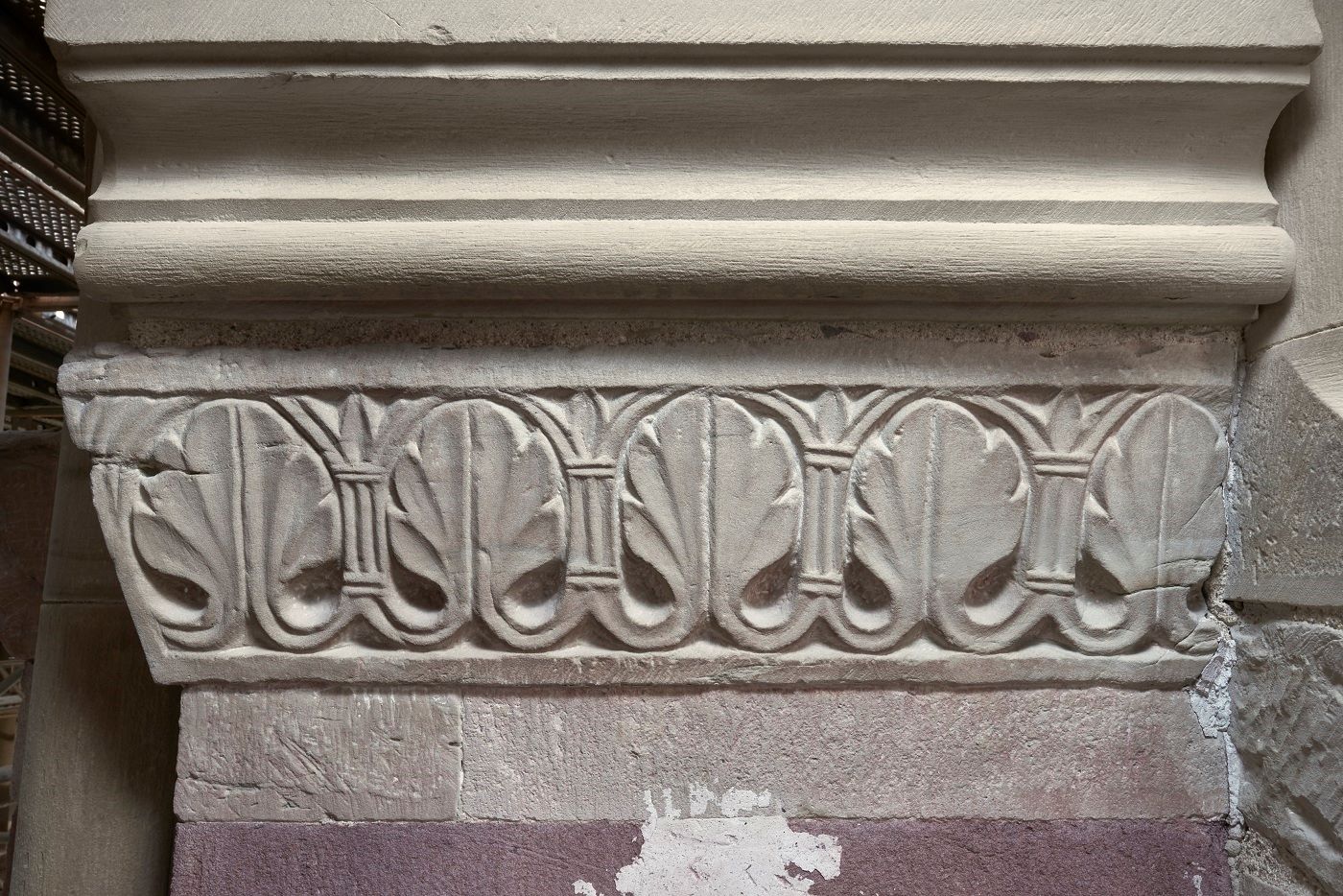 No evidence of a tower structure to the west can be found for the Werner construction. It can only be assumed that this was not erected, or possibly not even planned, as the church, like many Italian churches of the 11th century, did not feature a west wing. In contrast, the western bay of the nave can itself be interpreted as a vestibule. Red pilaster strips at the level of the last pier of the aisle walls indicate that it was originally much more clearly offset from the remainder of the nave than it is today. 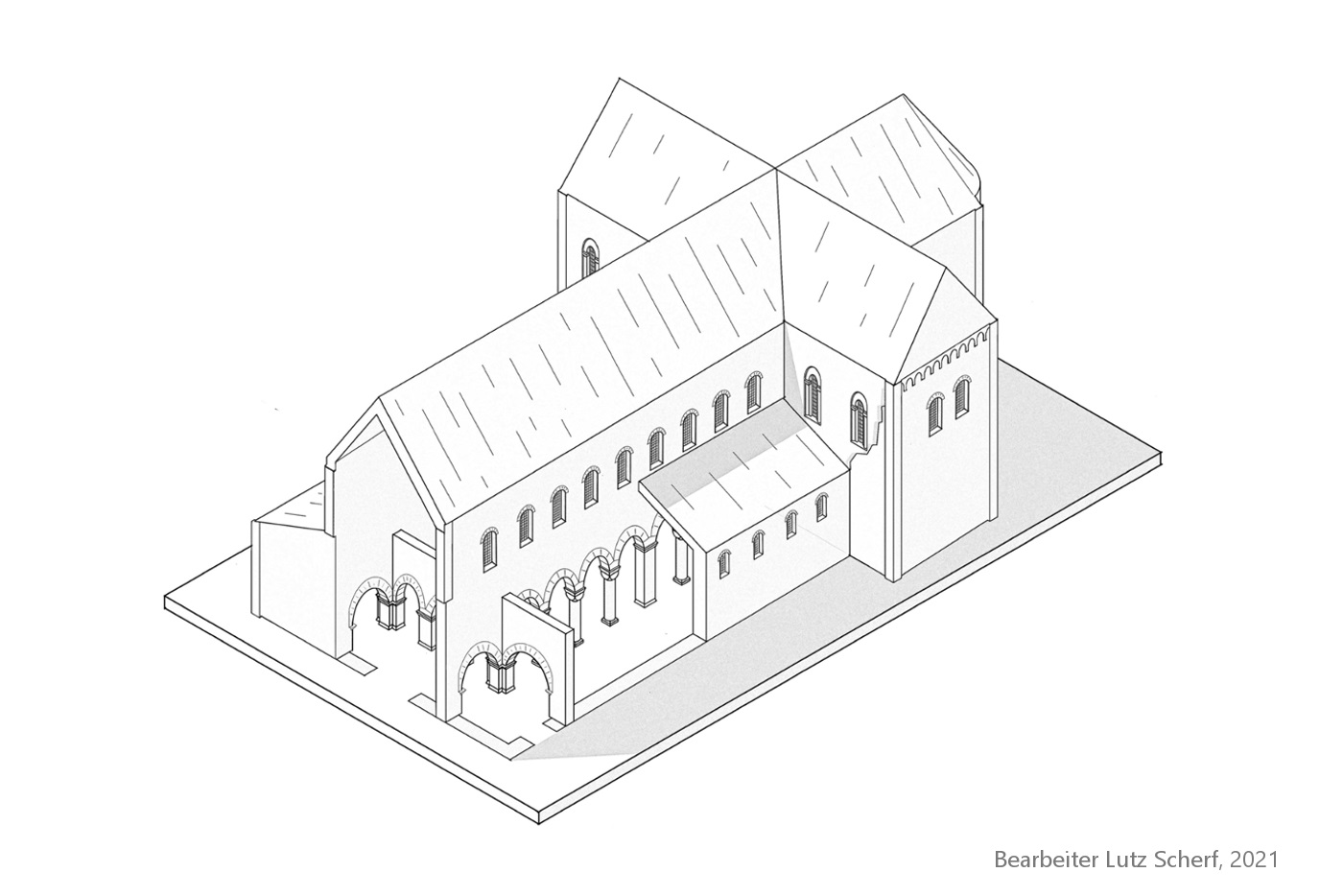 50 years after the death of Archbishop Werner, a new chapter in construction history commenced with the Premonstratensians of Norbert von Xanten. Norbert himself writes at the time of taking office of his urgent desire to restore the church and the monastery. The actual structural condition of the basilica and the building around 1129 can no longer be determined. Broken roofs, a non-existent west wing and, after 50 years, no doubt signs of wear and tear, possibly construction defects and the by now already outdated architecture will have been grounds enough for Norbert to modernise what was in his eyes an outdated structure. From his prior time in France, Xanten and Cologne and awareness of the French construction undertakings in the great cathedrals and abbey churches he will have swiftly impressed the necessity for corresponding adornments in his bishop’s seat in Magdeburg. Norbert will consequently have made a quick start to construction work in Magdeburg. Evidence exists for the prompt erection of the west tower structure with rounded towers. After Norbert died relatively suddenly in 1134, his closest confidante and pupil Evermod continued the construction work and brought it to a conclusion. A scaffold timber from a tree felled in 1138 that was found in situ during construction work in 2021 bears witness to this, together with the structural forms retained.

Soon after the construction of the lower floors of the tower a large, stepped portal with rich ornamentation in the area of the capital was broken out from the final bay of the south wall. Dating is possible here via the forms of ornamentation used, which are comparable not only to the capitals in the cloister of Magdeburg Cathedral, but also those in the so-called Kaiserdom cathedral in Königslutter. The close relationship between Emperor Lothar III (1075–1137) and Norbert von Xanten can surely be regarded as a link in this respect. 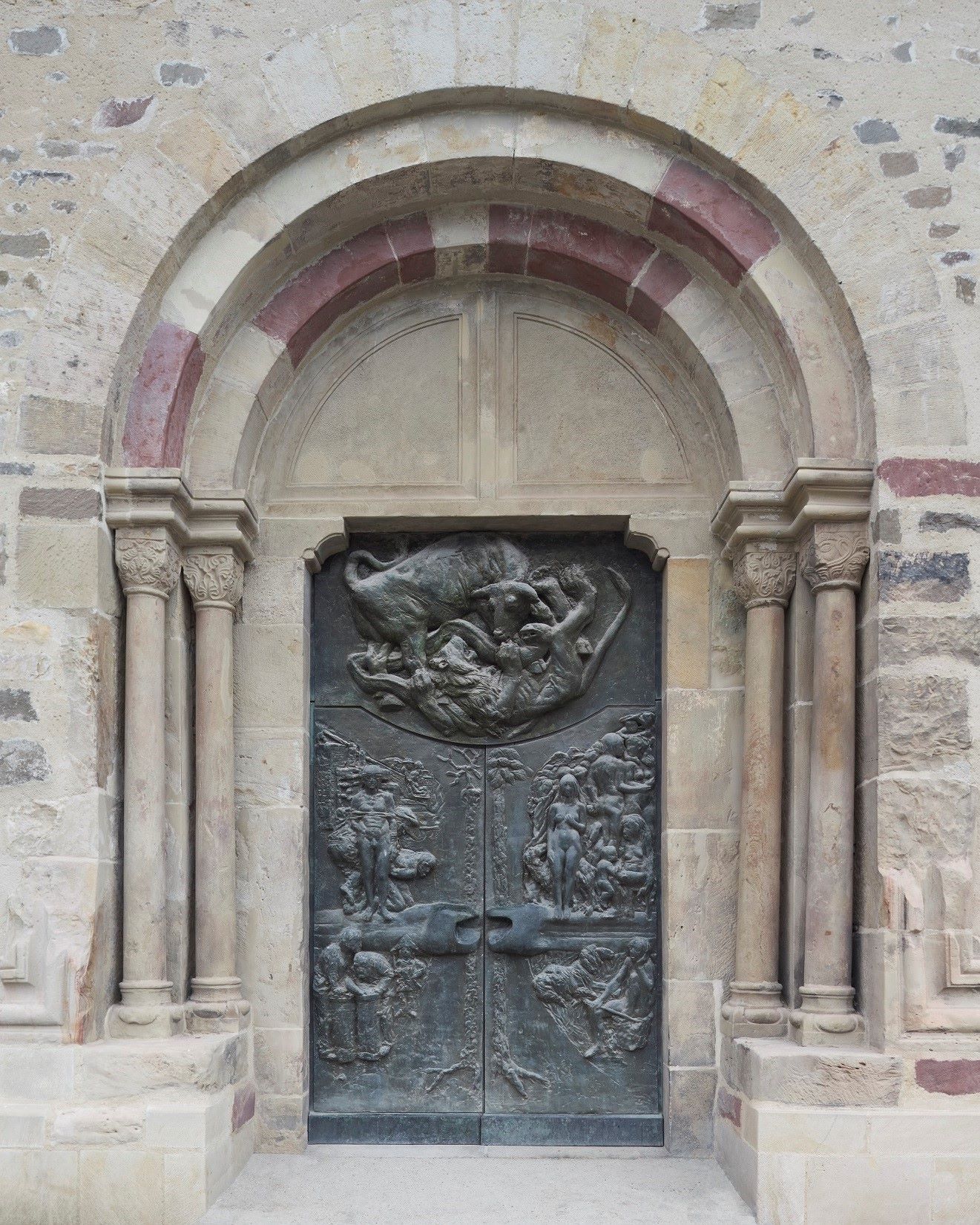 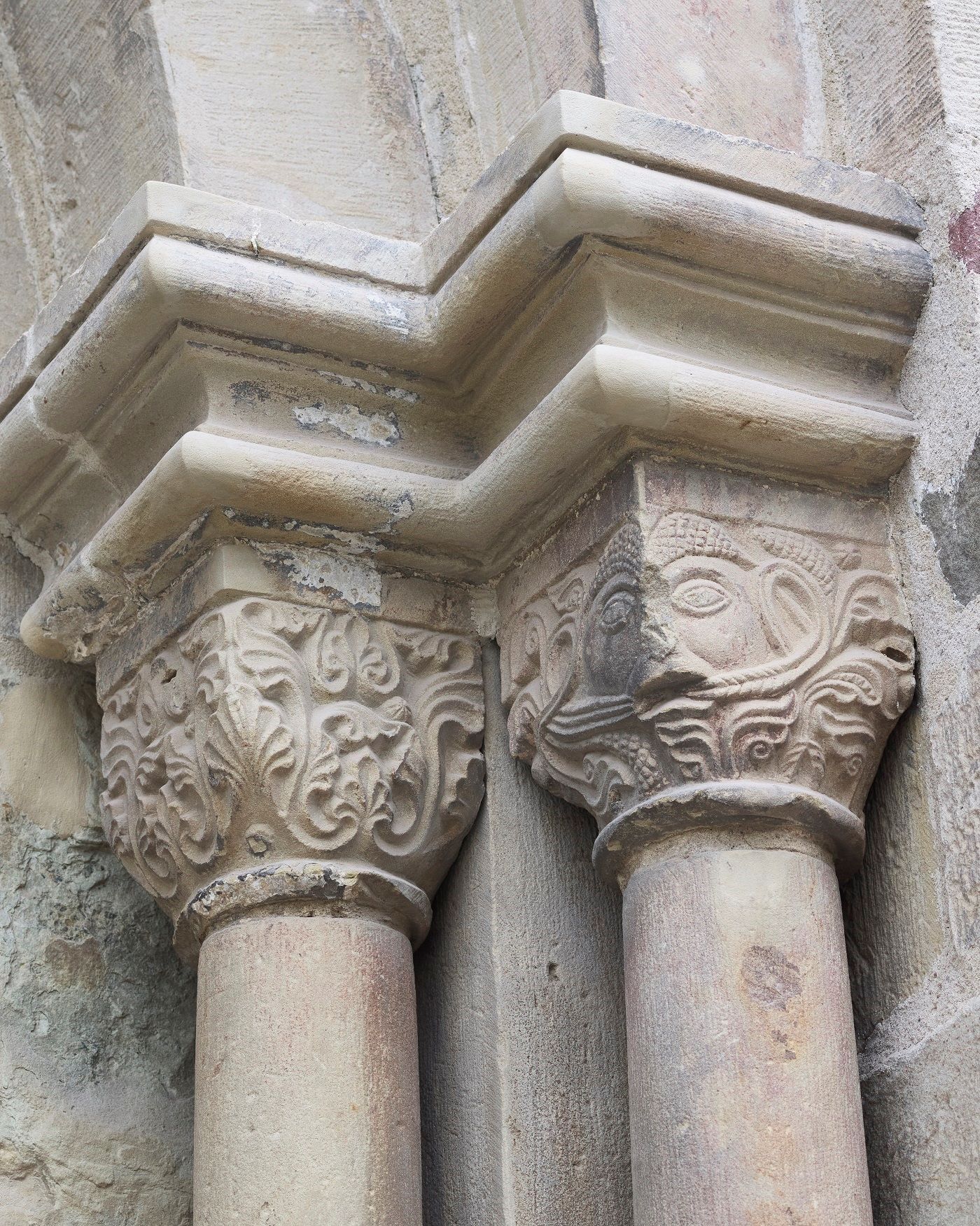 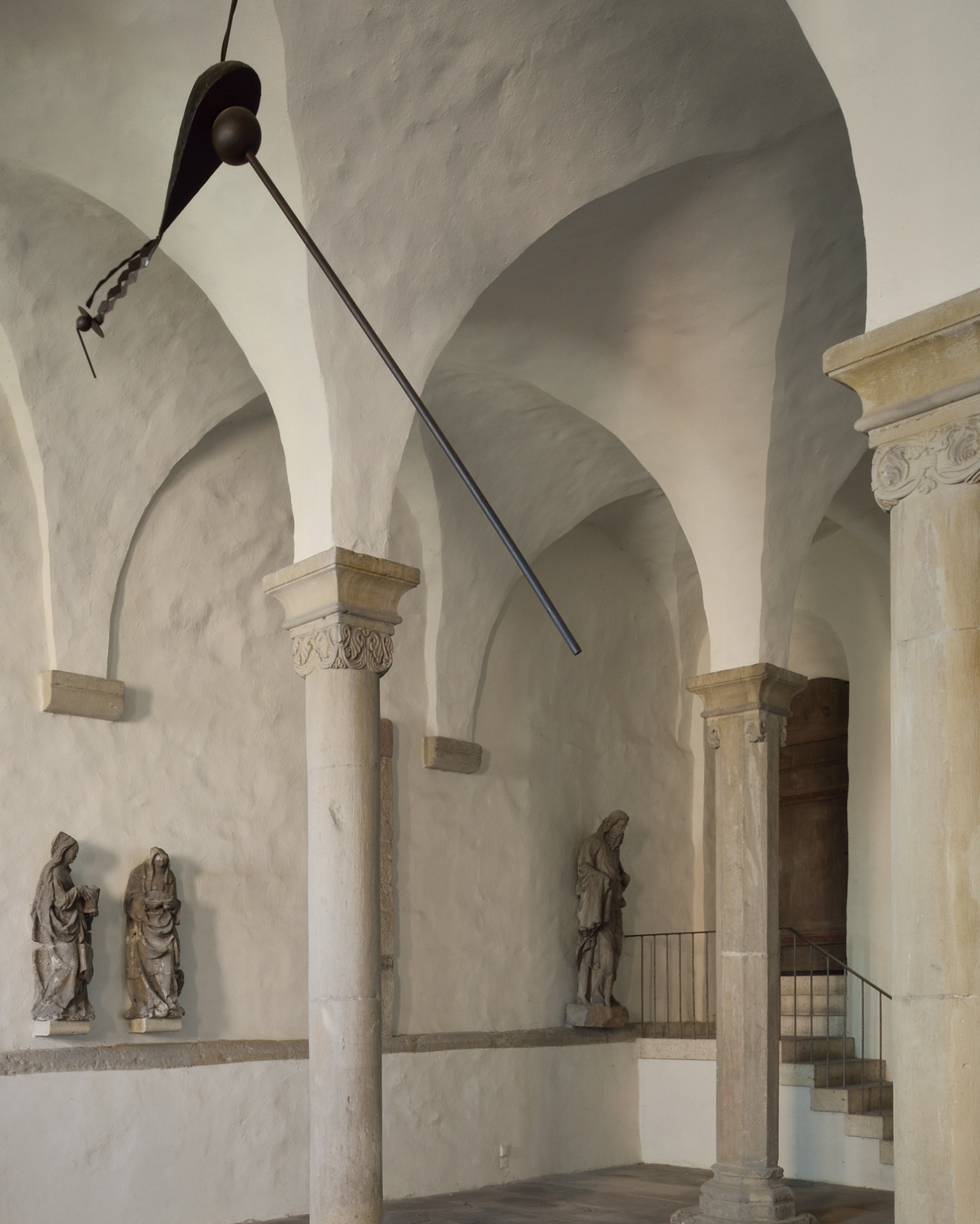 In addition to the south portal, from a stylistic viewpoint the so-called high-columned chapel, built in place of an apsis in the angle between northern transept and choir bay on the cloister, also belongs to the construction phase under Norbert, respectively his successor, Evermod. In the late medieval period this room, which could also be accessed from the upper floor of the cloister, served as a vestry; whether it was actually built as such is not known.

The nave of the columned basilica also underwent major alteration under the Premonstratensians. The columns that were once present – of which one of each remain in the second pair of piers – were replaced by rectangular piers with diverse high-quality features such as corner capitals and ornate forms, which are today somewhat concealed behind the slender columns dating from the 13th century.

The fire of 1188 was previously held responsible for these structural changes. However, in 2021, surveys of the ascending stonework throughout the nave and the high-columned chapel revealed that no traces of fire could be found at any point of the ascending stonework. As the cathedral was also not burnt out, it is equally conceivable that the fire reached parts of the monastery, but not the church of St. Marien.

As a result, the construction history under the Premonstratensians can also be amended. A modernisation phase for the church with the erection of the west tower group, construction of the south portal, building of the high-columned chapel and further extension and conversion of the monastery building can subsequently be attributed to a construction phase under Norbert, respectively Evermod.

Of especially high quality is the working of the rectangular piers with angled edging and beautiful palmette work, later found in Jerichow and Naumburg. Examples range from the Neuwerk abbey church in Goslar via the crypt in Riechenberg and on to the chapter house of the abbey at Ilsenburg, Neuenburg above Freyburg on the Unstrut and in the double chapel of St. Crucis in Landsberg (from 1156-1170). Even greater similarity to the Magdeburg piers, even featuring the same palmette ornamentation, can be found in the cloister of the Cistercian abbey at Schulpforta (from 1137), the middle crypt of Naumburg Cathedral and the crypt of Konradsburg monastery in Ermsleben. 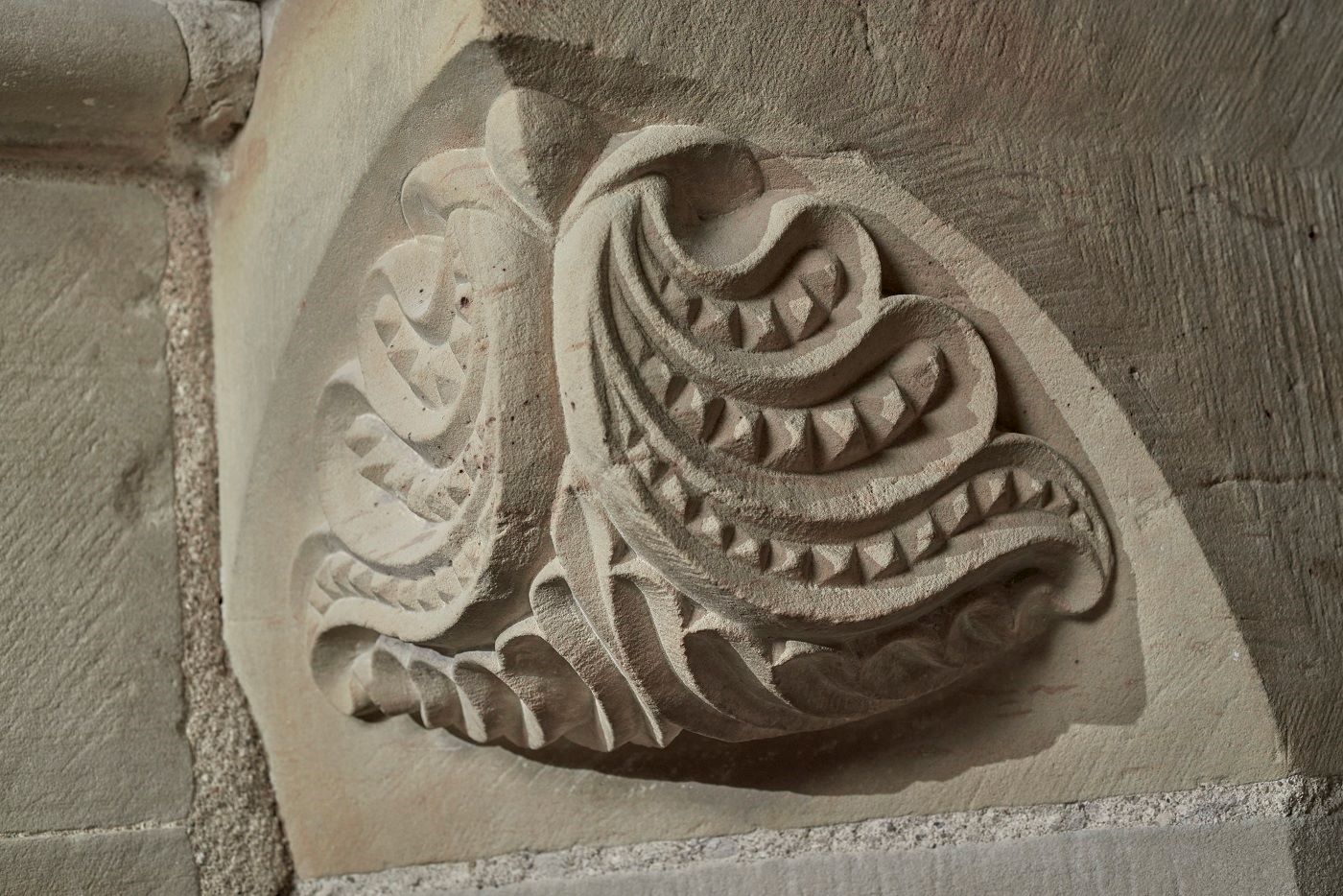 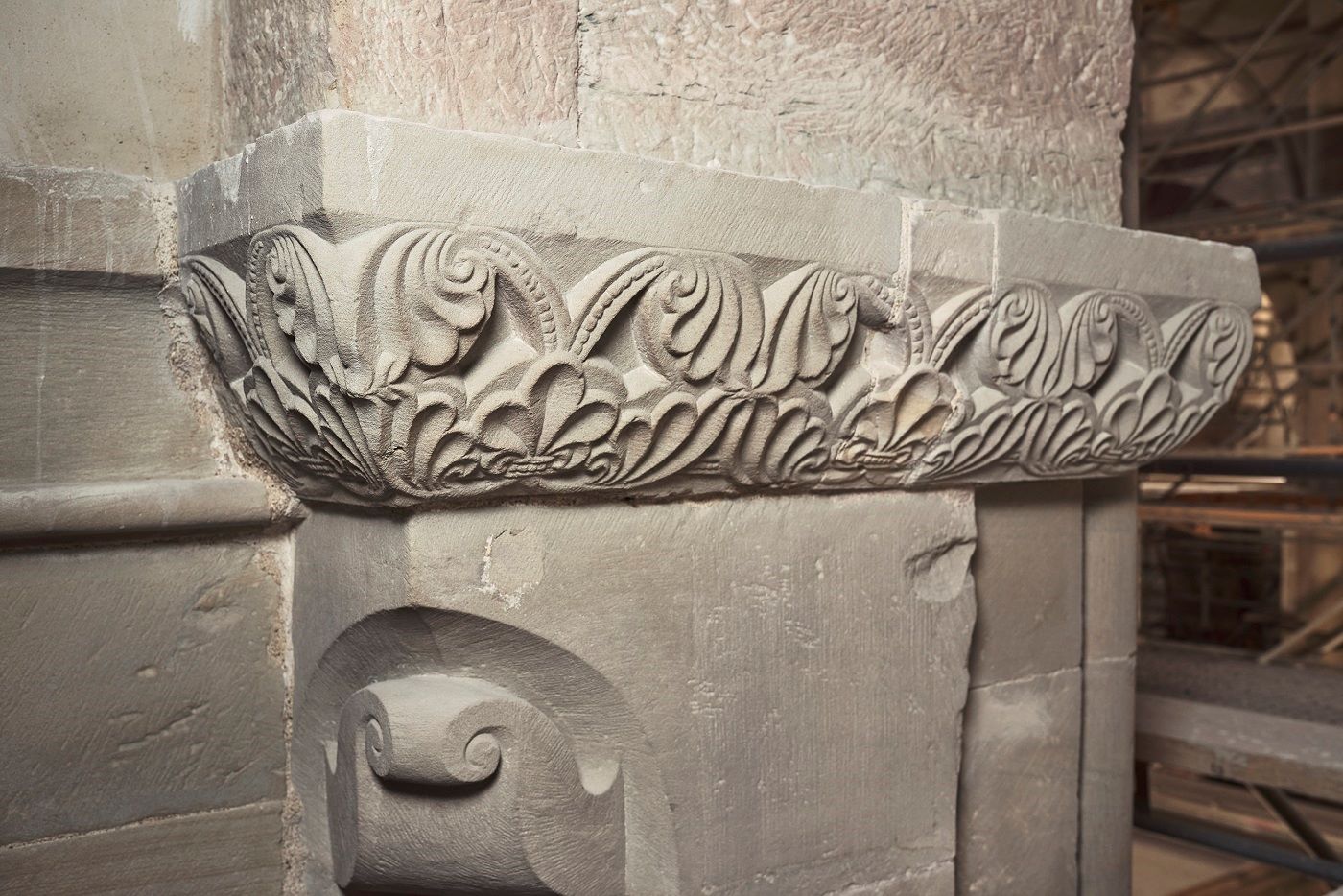 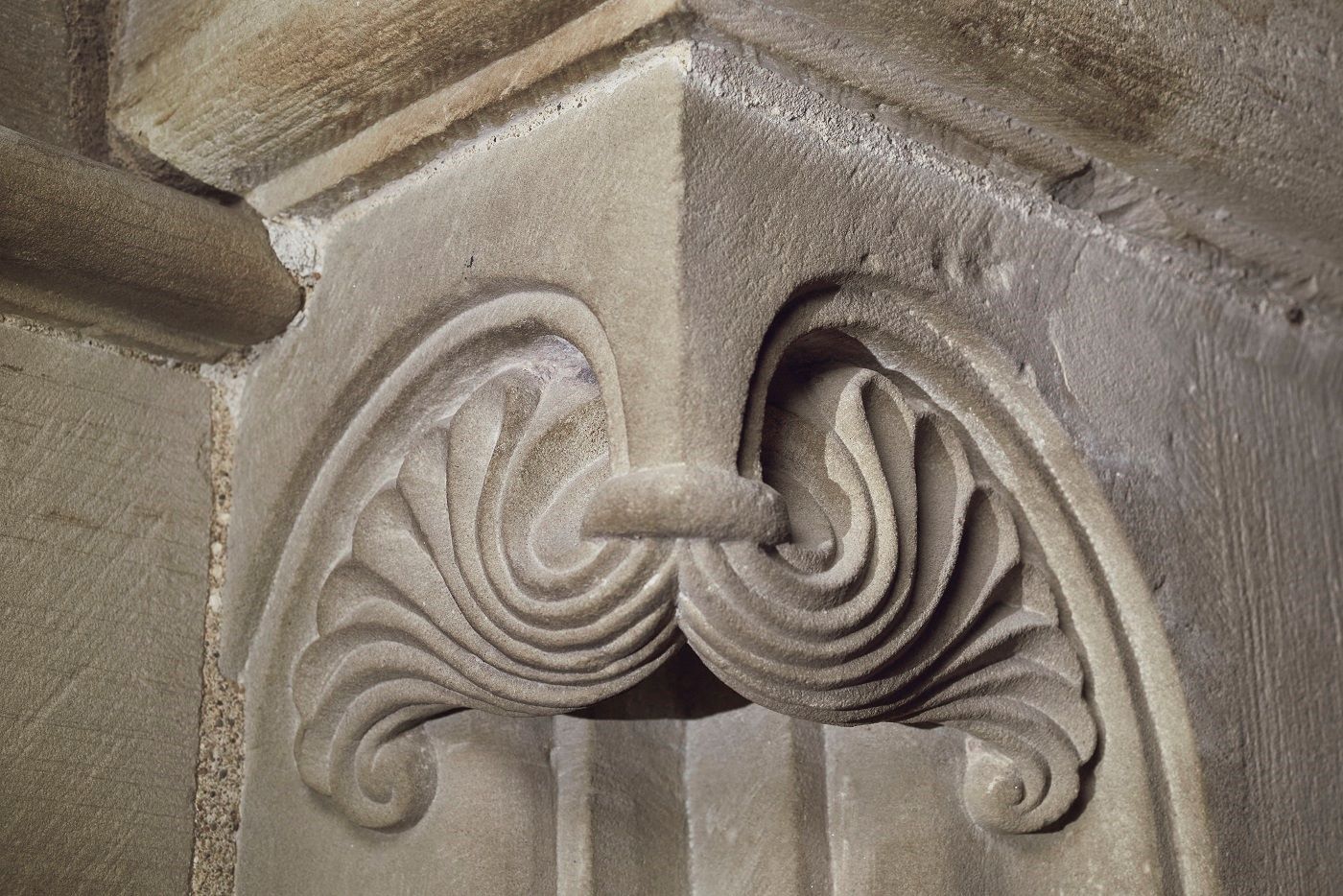 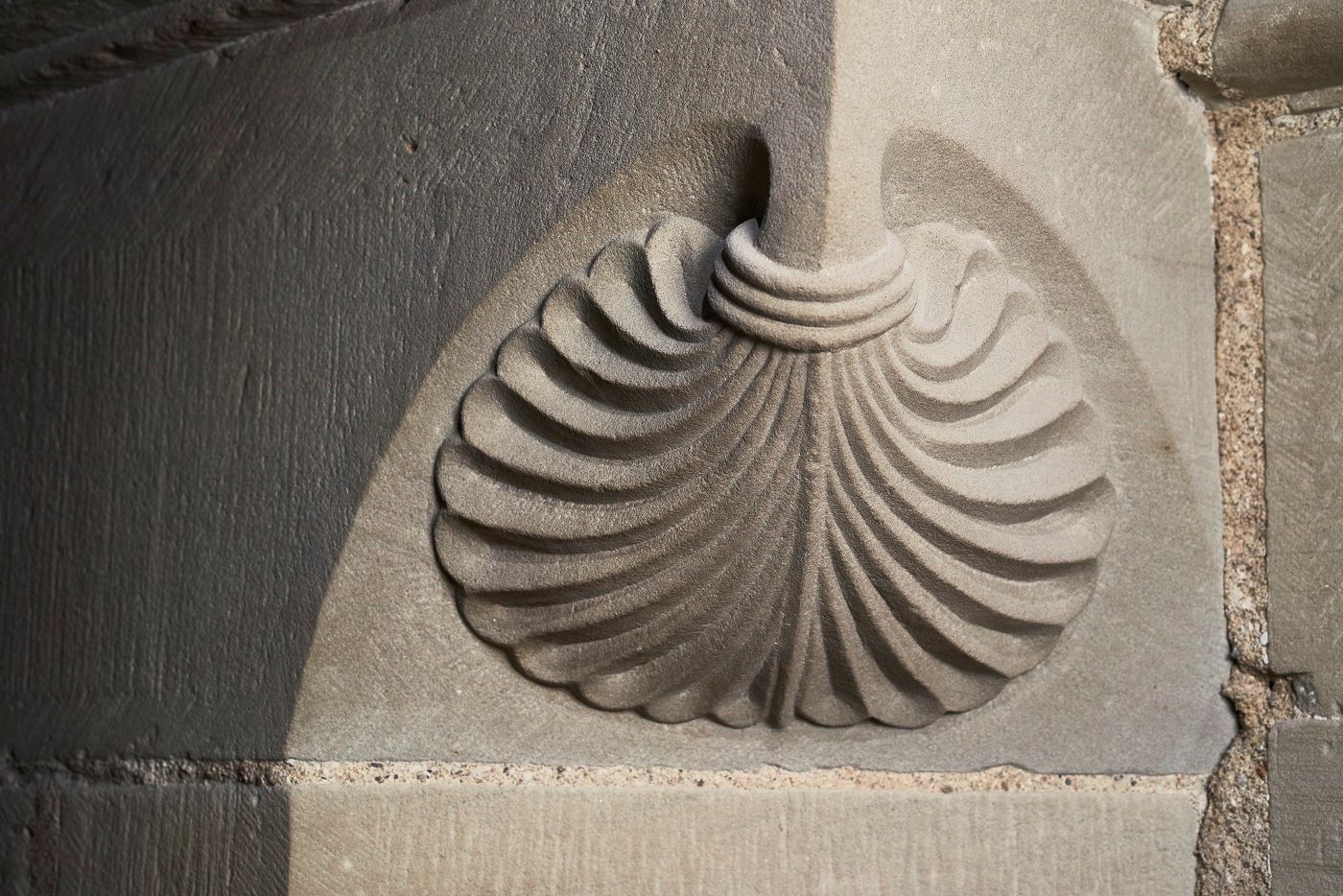 It is possible that the old columns of the Magdeburg basilica were abandoned in favour of the piers for the construction of a groined vault. The groined vault was constructed or restored at that time in the aisles of the church, where it remains today. Quite why the vaulting of the central nave failed to be undertaken in the middle of the 12th century is no longer known. The installation of the vault that remains in place today did not actually occur until from 1220 onwards, a time when it was possible to construct groined vaulting and where the next wave of modernisation was oriented towards the state of the art in construction techniques.

In conclusion, it can be noted that the monastery and collegiate church saw three major stages of construction, in each of which high-quality architecture was created, manifesting a certain aspiration. Whilst the construction phase under Archbishop Werner from 1070 focused on the stabilisation of political power, with orientation towards Italian motifs, found throughout the Holy Roman Empire and beyond, under Norbert von Xanten and his former pupil and successor in the order, Evermod, the emphasis lay upon the presentation of a new order as an expression of monastic might. Although the south portal still displays an upper Italian influence, the supportive apparatus in the nave and the high-columned chapel indicate a considerably more modern influence. The incorporation of these construction forms in the mid-12th century led - as was the case with the orientation towards the latest French structures around 1225 - to a highly autonomous form of construction on this site, the significance of which for other structures in the region remains largely unresearched.